Here's my problem with almost every color infographic out there: just when I'm about to say "aha!" and follow whatever it says, something stops me right in my tracks: where is the author getting all this information from? That's when I start digging every link in the "references" section. Disappointment sinks in: while interesting, none of these "facts" are based on solid scientific evidence.

That's why I decided to collect evidence-based insights about color meanings that can help us all make more informed — and responsible — design decisions both for personal and client projects.

Before I share these with you, I will say that the scientific method is not free of flaws. The insights you are about to read have all been published in reputable academic journals, backed by rigorous experimentation protocols, and defended by leading experts. Some are based on qualitative and others on quantitative studies. Unlike other data points you'll find across the Web, these were not generated by companies/brands, but by researchers with a compromise to remain objective and impartial — acting under the scientific method.

Also worth noting is the fact that colors carry cultural associations that make it very difficult to land at universal meanings. Simply put, what red evokes for Western users might be totally unrelated to what it does for Eastern users. Analyze the following studies and insights through the lens of where they took place.

Color Insight 1: Red, orange, and yellow evoke so-called active emotions, or feelings that involve physical arousal. The opposite of active emotions are passive ones, and those imply some kind of sedation. (Clarke and Costall, 2008) 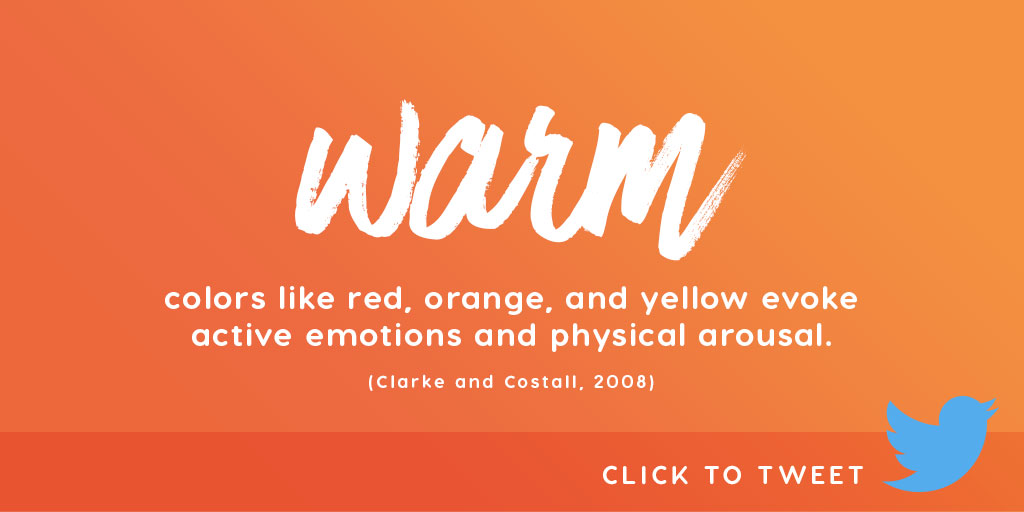 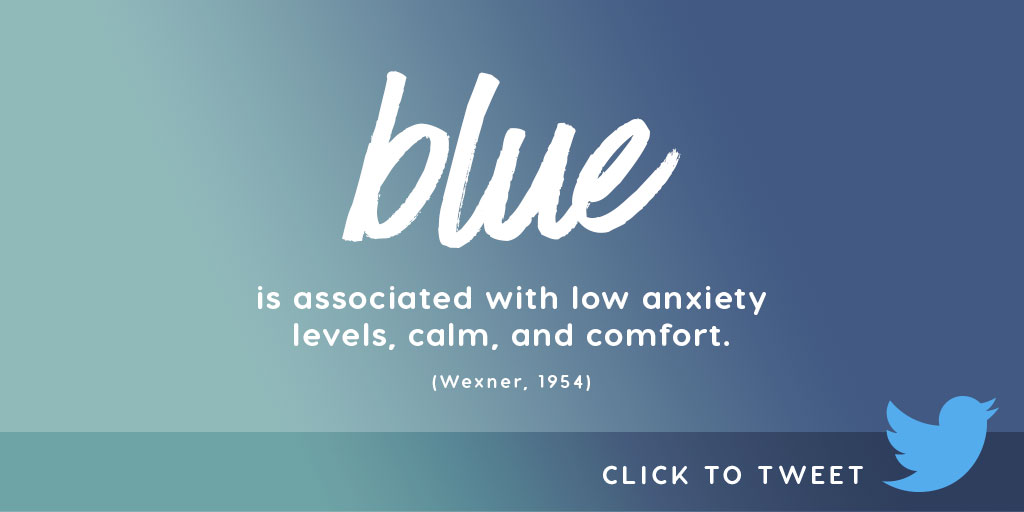 Color Insight 3: Yellow has been linked to happiness and excitement because it evokes the sun and summer time. (Kaya and Epps, 2004)

Color Insight 4: Red provokes more anxiety than blue, and that affects the way users perceive wait times. This study found that users exposed to a blue background screen while waiting for a download perceived it as quicker than did participants exposed to the red background screen. (Gorn, 2004)

Color Insight 5: This study found strong evidence that black is consistently seen as defiant, and not associated with words like tender, calm, and cheerful. (Murray, 1957) 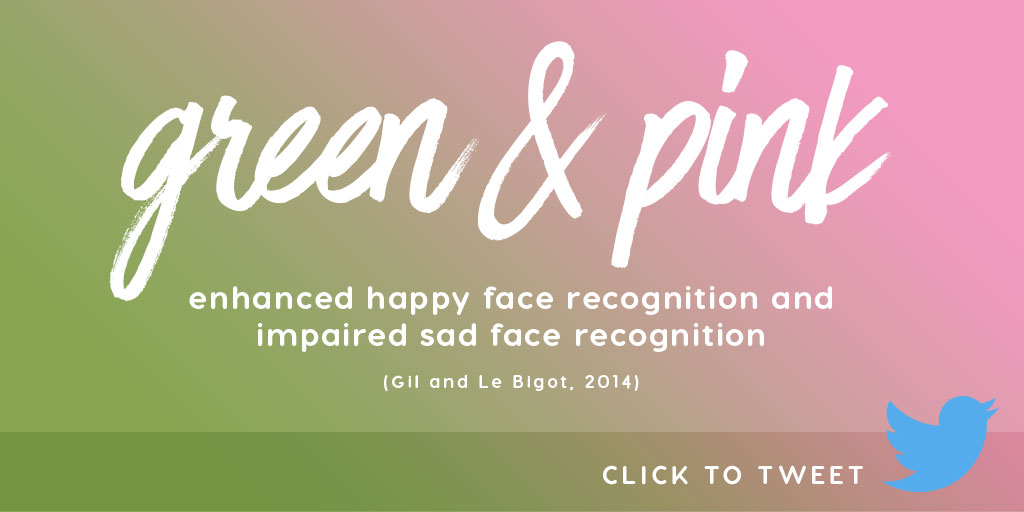 Color Insight 7: Like music, color conveys emotion. So well, in fact, that a study found that there was a connection between music and color choices. Listening to faster music produced color choices that were more saturated, lighter, and yellower whereas slower, minor music produced the opposite pattern (choices that were desaturated, darker, and bluer). The emotional associations of music were found to be strongly correlated with the colors chosen to go with it. (Palmer et al, 2013)

Color Insight 8: When taken together, the results of five color-taste studies coincide in that the color black (and purple/violet) is widely associated with bitter. Salty is associated with white, and sometimes blue. Meanwhile, sour is often related to yellow and green. Sweet is linked to pink and/or red. (Spence et al, 2015)

Color Insight 9: Color is also related to scent. A 2014 cross-cultural study observed that the fruity odor tended to be associated with pink and red colors, while the musty odor was more associated with browns and oranges. (Levitan et al, 2014) 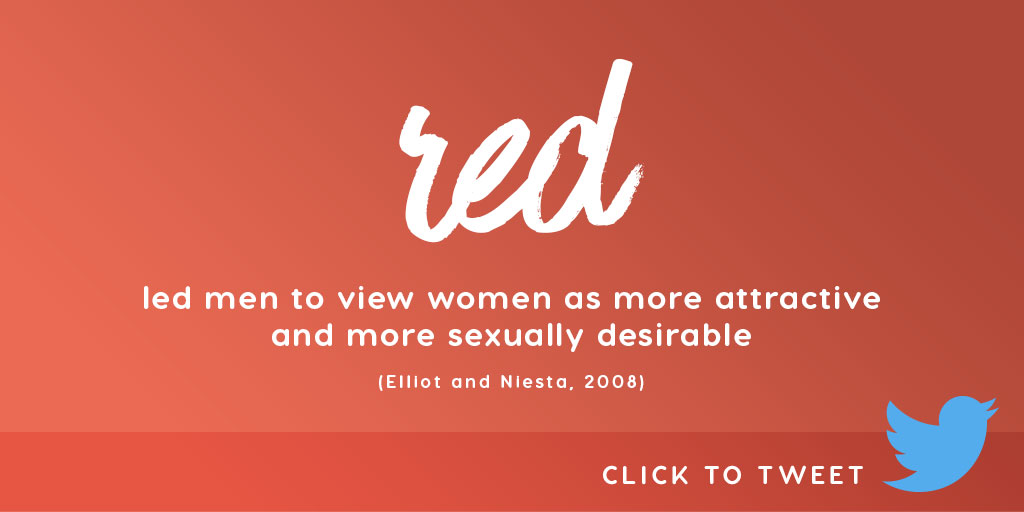 Color Insight 12: A study on color associations in children showed that they link red with love and anger, while black evokes death. White was the color most often named for honesty. (Byrnes, 1983)

Color Insight 14: Studying Hong Kong white-collar workers and managerial staff in mainland China, a group of researchers concluded that someone's occupational background is associated with how color is interpreted for its connoted meaning. We should consider occupational background carefully when choosing colors in product designs, especially for safety. (Wang and Or, 2015)

Color Insight 15: A 2008 study with adults and pre-literate children concluded that we map certain colors with specific letters in two major ways: natural bias (the shape of the letter resembles the color) and literacy (we've been taught to relate them). For example, we associate letter X with black via natural bias, and A with red via literacy. (Spector and Maurer, 2008)

Color Insight 16: Across 6 experiments, results showed that color-based stereotypic associations (like pink is for girls, blue is for boys) guide young children's behavior, activate associated stereotypes in adulthood, and bias impressions of male and female targets. This phenomenon takes place despite our efforts to ban stereotyping and discrimination. (Cunningham and Macrae, 2011)

Color Insight 18: A group of scientists used photographs to investigate clothing color effects on a group of raters and clothing wearers. They discovered that clothing color has a psychological influence on wearers at least as much as on raters, and that this ultimately influences attractiveness judgments by others. Their results support the idea that color associations can bias interpersonal judgments. (Roberts et. al, 2010)

Color Insight 19: From a series of six studies, using different types of tasks, a group of researchers demonstrated that red (versus blue) can activate an avoidance (versus approach) motivation and subsequently can improve performance on detail-oriented (versus creative) cognitive tasks. Blue enhanced performance on a creative task. As participants completed these two types of tasks, color was manipulated through their computers' background screen color. (Mehta and Zhu, 2009) 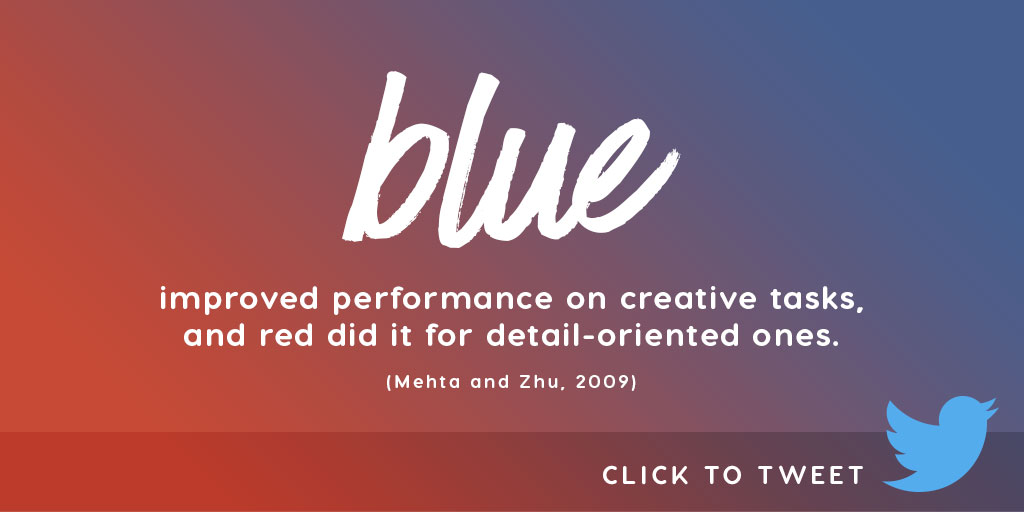 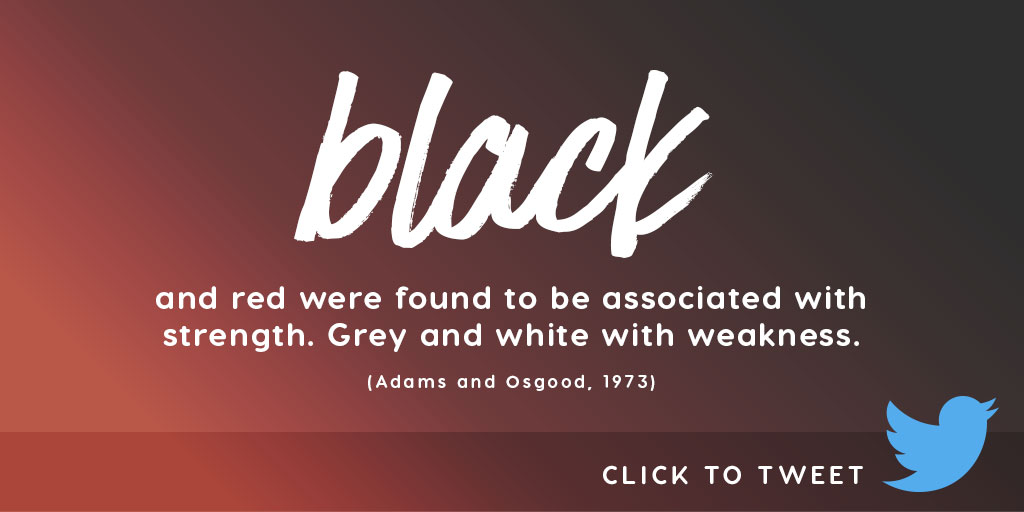 Color Insight 22: A study with 98 college students showed that color green evokes mainly positive emotions such as relaxation and comfort because it reminded most of the respondents of nature. The color green-yellow had the lowest number of positive responses because it was associated with vomit and elicited the feelings of sickness and disgust. (Kaya and Epps, 2004)

Color Insight 23: Four experiments demonstrated that the brief perception of red prior to an important test (e.g., an IQ test) hurts performance. This effect appeared to take place outside of participants' conscious awareness. (Elliot et al., 2007)

Color Insight 24: A color-gender study in 6 countries evidenced that color is very important for females for most of the product categories, particularly clothing, backpacks, hats, bathing suits, and house paint. Color was more important for men in products such as digital cameras, candy, game systems, beverages, toothbrushes, and mouthwash. (Okan, 2013) 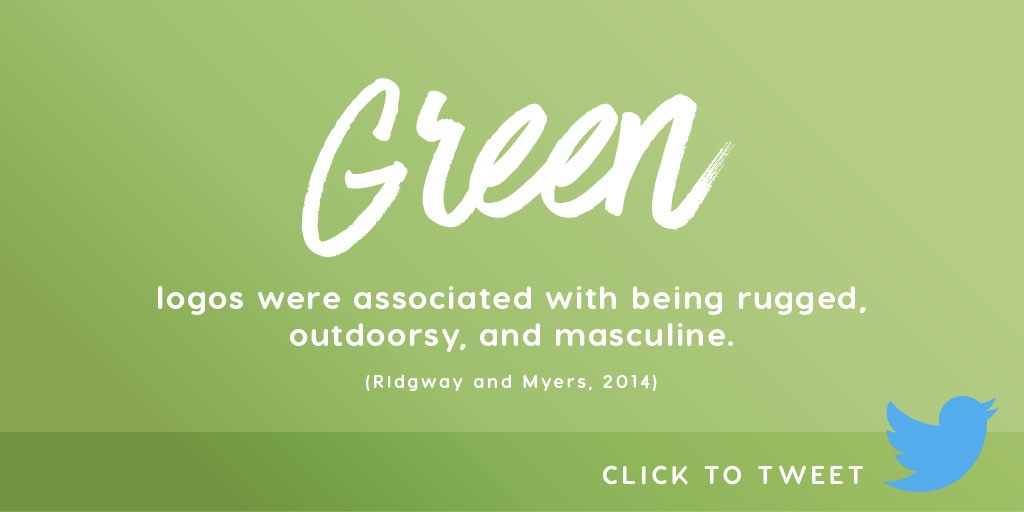 Color Insight 27: To help photographers and designers who work with images, scientists in Taiwan conducted a study to evaluate how psychological factors (related to color) play a different role in different image categories. They found that Color Comfort plays the most influential role in scenery images while Color Harmony is influential in images about food and plants. (Shing-Sheng and Po-Sung, 2010)

Color Insight 28: In a study about indoor color and buying behavior, researchers found that green color and the time spent in the store were statistically significant positive effects on product purchase. Time spent in the store was positively associated with soft lighting conditions, but negatively associated by red indoor color. (Barli et al., 2012)

Color Insight 29: 1095 Dutch citizens were surveyed about their color preferences to evaluate how topics and contexts would impact choices. Black was the overall favorite color for clothing, mainly chosen by females (40%), while males primarily chose blue (27%). For building interiors subjects preferred white. For moods, subjects preferred white for being quiet or being able to focus, red for being energetic and had no color preference for being creative. (Bakker et al., 2015)

Wait, what is color chroma and value? In colorimetry, the measurement of color, there's a system called Munsell that defines colors based on three dimensions: hue, value (or lightness) and chroma. Hue is what we know as the actual color (think purple, blue, red), value relates to how light or dark it is (think tints and shades, or how much white or black there is), and chroma points to the color's purity, intensity or saturation. 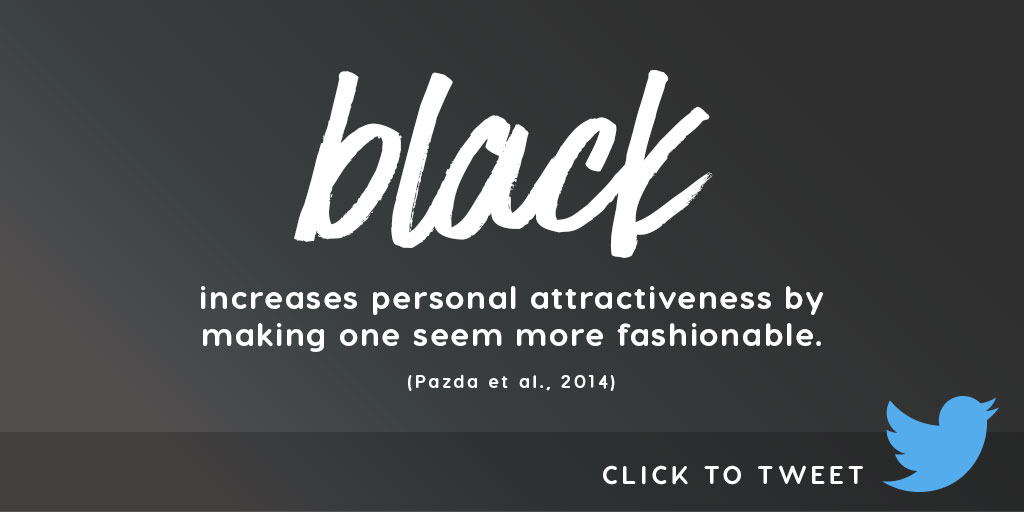 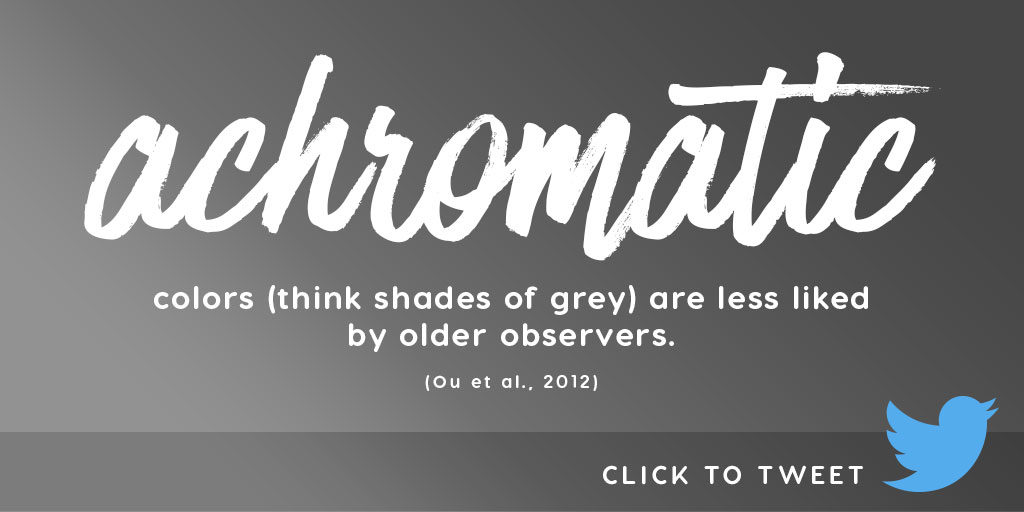 Color Insight 34: Studying the impact of saturation on visual comfort, a group of scientists found that the lower the mean saturation of a given image, the more comfort is felt when viewing it. An image's saturation value had a negative correlation to visual comfort. (Sagawa, 1999)

Color Insight 35: Color is also related to fragrance. In a series of experiments that tried to analyze this relationship, warm colors strongly evoked the floral fragrance family, while the cool colors did the fresh family. The warmer the hues were, the higher their similarities with floral fragrances became. (Kim 2013) 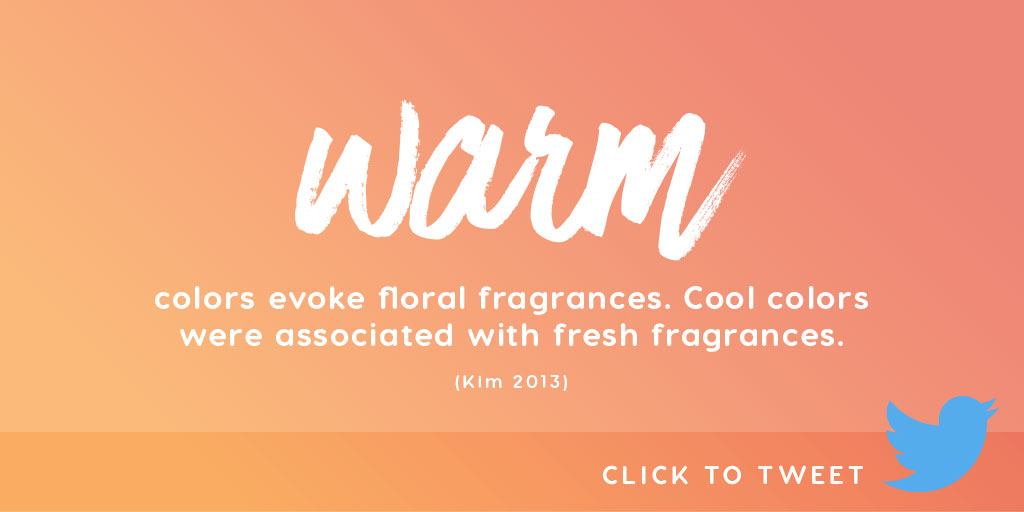 Color Insight 36: In a study on the bio-psychological effects of color, blue excited the sympathetic nerve system and increased blood flow to the subjects in a relaxed state. Many subjects felt calmed by purple. (Kido, 2000)

Color Insight 37: When thinking about food, what role does color play? Results of a study on tomato puree buyers showed that color and brand name seemed to be more important than taste and odor of fresh tomato. When consumers were tasting samples, color and brand name affected not only hedonic judgments but sensory perception as well. (Monaco et al., 2003)

Color Insight 38: In a study on environmental color, more positive retail outcomes occurred in blue rather than red environments. More simulated purchases, fewer purchase postponements, and a stronger inclination to shop and browse were found in blue retail environments. (Bellizzi and Hite, 1992)

Color Insight 39: Analyzing color naming, a group of researchers found that the characteristics of a color's name may drive how people process certain products. People are more interested in an unfamiliar (or atypical) color names (e.g., blue haze or Alpine snow) because such names invite them to search for the reason for the deviation. This search results in additional (positive) attributions about the product, and a more favorable response. (Miller et al., 2005)

Color Insight 40:When asked about colors that matched a certain brand's qualities, respondents associated stability with blue/brown, fun and energy with yellow, and excitement with red/purple. (Hynes, 2009) 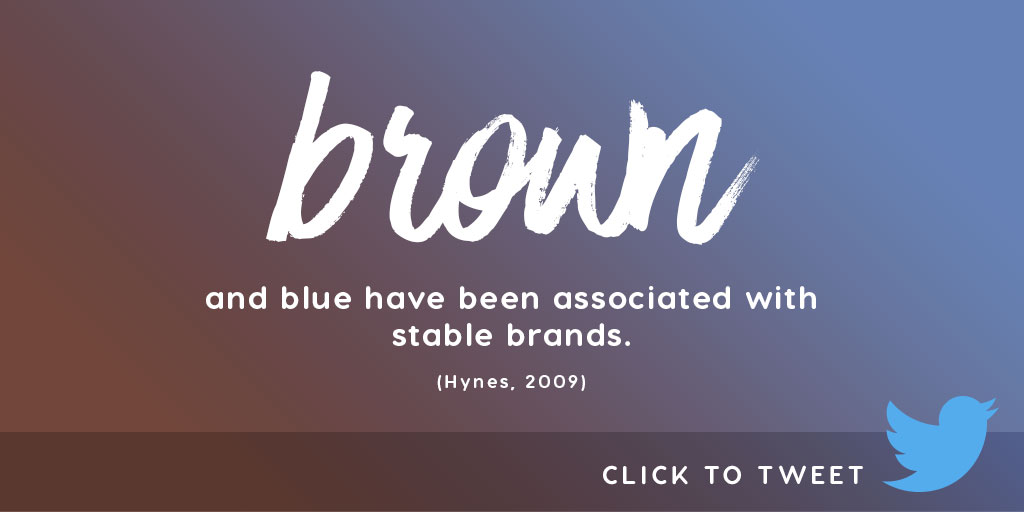 Color Insight 41: In a classic study on color and affective stereotypes, cluster analysis showed that red, orange, and yellow were associated with outgoing exuberance; red, yellow-green, and purple, with hostility; and purple, gray, and black, with asocial despondency. (Aaronson, 1970).

Color Insight 43: Researchers in Canada looked at the importance of color for web design and concluded that website color appeal is a significant determinant for both website trust and satisfaction. (Cyr et al., 2010) 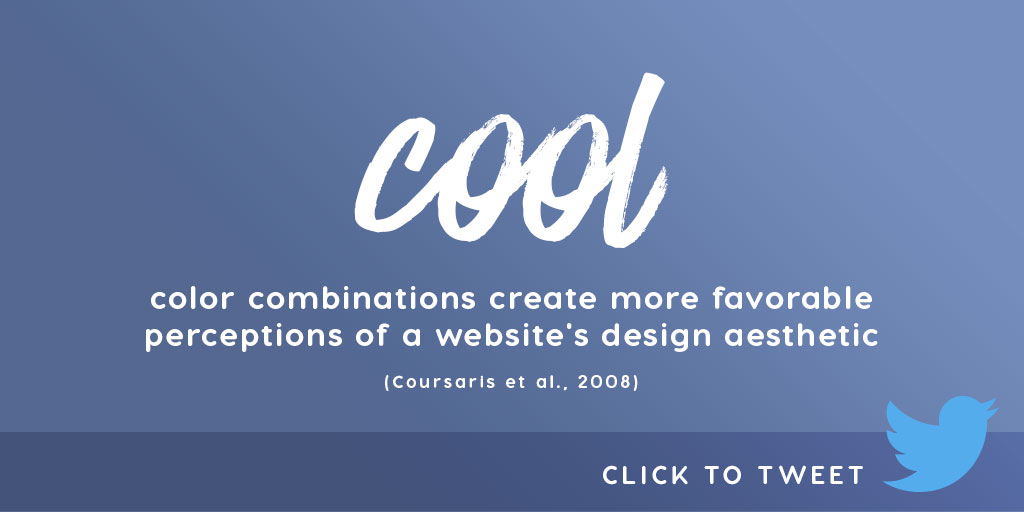 Color Insight 46: Red color and red light trigger a stop in movement and activate a state of threat. Motor performance tasks requiring online control may be affected by this phenomenon. (Williams et al., 2011)

Color Insight 47: Color can affect the way in which we process faces. French researchers found that a red background resulted in more negative face perception than a green background, whether the poser was female or male. (Gil and Le Bigot, 2015)

Color Insight 50 Lastly, a group of researchers found that the associations carried by colors appear to be dependent on the context at hand. That doesn't mean that the insights revealed above are not applicable or valid, since there is a clear overlap between universal associations and those that the context in which you've lived "trains" you to recognize.

Cymbolism: a project that aims to compile designers' color-word associations via voting to help others create better visuals. For example, 64% of respondents associated "Clean" with color white.

Pin it for later! By Sam Parrett in Fonts By Lera Efremova in Graphics

Okan, A. (2013, February). Cross-cultural analysis of gender difference in product color choice in global markets. Retrieved May 9, 2016, from http://connection.ebscohost.com/c/articles/86950261/cross-cultural-analysis-geender-difference-product-color-choice-global-markets 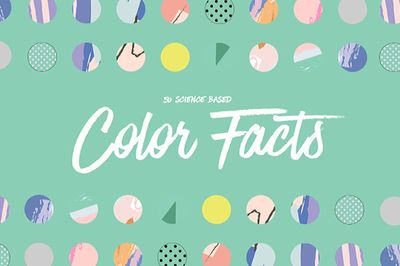 Founded 150 years ago, it’s no doubt that Sherwin William’s is quite the authority on paint color. For 2017, the Fortune 500 company has
K
Karen Hall
519 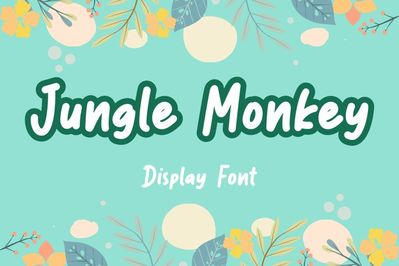 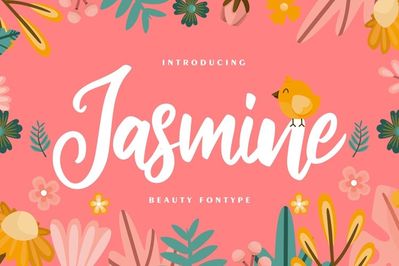 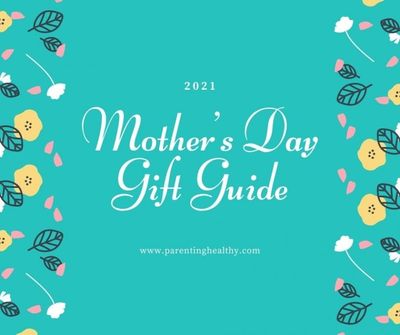 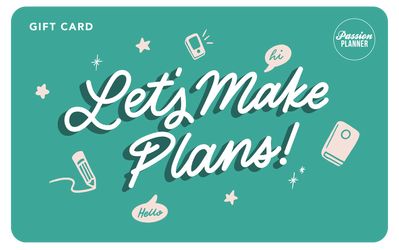 Shopping for someone else but not sure what to give them?Give them the gift of choice with a Passion Planner gift card. Gift cards are delivered by email and contain instructions to redeem them at checkout.Our gift cards have no additional processing fees.
P
Passion Planner
1827 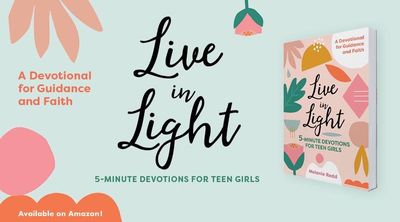 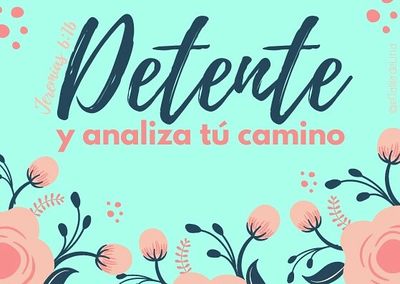 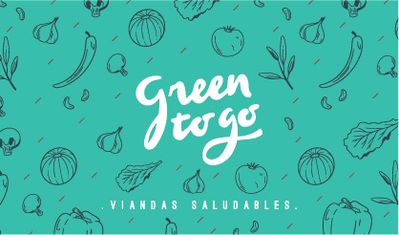 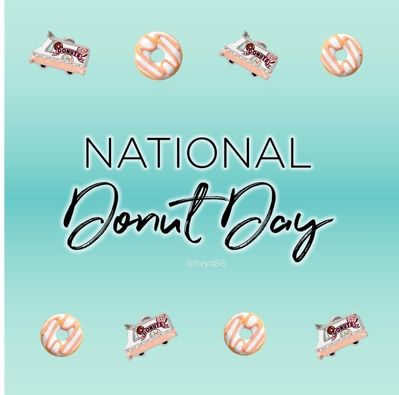